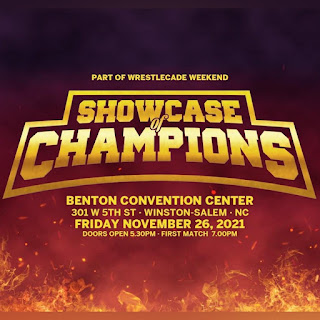 Black Chadwick and Josh Gerry are the broadcast team.

Savannah Evans and Battle Club Pro Franchise Champion Mik Drake beat Dream Girl Ellie and Battle Club Pro Champion 5-Points Champion Steve Pena when Evans pinned Eliie after the full nelson slam. Both titles were on the line in the match but neither changed hands since Evans got the fall on Ellie. Ellie was a replacement for Battle Club Pro Icons Champion Big Swole who has been out of action since September.

Viral Pro Wrestling Heavyweight Champion Sean Legacy pinned Anthony Henry in a controversial finish as both were packaged up on the mat after a superplex spot.

Stephen P. New came out to the ring. He’s Jim Cornette’s lawyer and a legit fan of pro wrestling. He has a podcast called “House of Kayfabe” and is involved with the ASW group out of West Virginia. He said Brian Myers could not be there but there would still be a ASW Heavyweight Title Match. Axton Ray is the replacement for Myers against Davey Richards.

Kenzie Page won a 3-Way Match over Jordynne Grace and KiLynn King to become the inaugural Imperial Pro Wrestling Women’s Champion by pinning King with a roll up and holding the tights while Grace was outside the ring. Grace came out to the ring with the Impact Wrestling Digital Media Title belt.

ROH 6-Man Tag Team Champions Shane Taylor, Kaun, and Moses beat Caprice Coleman, Zuka King, and The Infinite Man T.I.M. (Team AML) when Taylor pinned King after a package piledriver. Taylor got on the mic after and put Team AML over and shook all of the their hands. He said Coleman looks ageless and younger than everyone else in the ring. All the members of Team AML hold titles in AML. Coleman said he wanted a photo op in the ring with all six guys holding up their titles. He thanked the fans for coming out.