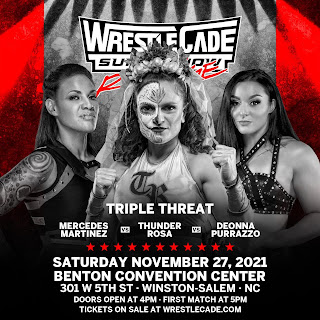 CW Anderson, Preston Quinn, JB Cole, and White Mike beat The Dawson, Mik Drake, and Brad Attitude when Drake was pinned in all of the chaos in the pre-show match.

Blake Chadwick and D’Lo Brown are the broadcast team.

The Rock & Roll Express (Ricky Morton and Robert Gibson) beat The Blondes of Bollywood (Harv Sihra and Gurv Sihra) when Morton pinned one of the brothers after a Canadian Destroyer.

AML Heavyweight Champion Caprice Coleman beat Dirty Dango by Cobra Clutch submission. Dango is the former Fandango in WWE. He got on the mic before the match and faked that his knee was hurt a few weeks ago. He said he wasn’t cleared to compete. Of course it was a swerve and he attacked Coleman. He kept talking on the mic and told the crowd they’re marks for falling for the oldest trick in the book. He said he did the same thing recently on a “spot show”. He bragged that he was in “The WWF” for 15 years. Someone from the crowd yelled out “It’s WWE!”

George South pinned Heath with a schoolboy. Heath got on the mic before the match and said the crowd is stupid for liking South and thinking South can beat him. After a little bit of wrestling South took a break and got on the mic. He simply said “Heath, I got grand babies!” After more wrestling Heath got back on the mic and said he needs the job because he has kids.

Jay Lethal pinned Matt Cardona after four flying elbow drops. Cardona got on the mic before the match and said he didn’t care if the fans were having a good time or not. He said he only cares about money and wins. He said he faked his smile while taking pics with fans at the convention meet and greets. He said Lethal is a Macho Man rip off and mentioned Lethal is now signed with AEW. He said he’ll be like Tony Khan and give Lethal a job tonight and make him bow after he beats him. The fans chanted “We want Chelsea!” referring to Chelsea Green who is at WrestleCade Weekend but she didn’t come out with Cordona. (Green will face Ivelisse there for the LNO Title at 1pm EST tomorrow as part of Ladies Night Out 11 on Title Match Network). During the match, Lethal left to go walk to the back. Cardona begged the referee to count him out but she didn’t do it. Lethal came back out doing his Macho Man gimmick. He brought out Lady Frost as his version of Elizabeth. He got on the mic and did his Randy Savage impersonation. Cordona attacked him after the match and gave him the Radio Silence. Jeff Jarrett then appeared and smashed Cordona over the head with a guitar. Lethal got on the mic and said he’s a fan of Ric Flair and Flair and Jarrett both do the strut. He challenged Jarrett to a “Strut Off”. They did it and shook hands to close the segment.

The Top Rope Belts Battle Royal is up next.

Shane Taylor won the battle royal over Johnny Swinger, Mr. Hughes, Sam Houston,, Moses, Fallah Bahh, “Action”Mike Jackson, Zuka King, Kerry Morton, Cyrus, Brad Attitude, Arik Royal, Axton Rey, Gustavo, The Awakening (aka The Ascension), Shane Douglas, White Mike, Marcus Kross, Jackie Fulton, Blanco Loco, Stan Lee, Swoggle, CW Anderson and one or two others I didn’t happen to catch by eliminating Brad Attitude last. Swoggle after it started with a kendo stick. He cleared out Shane Douglas and gave Bahh a choke slam. CW Anderson then came out dressed as the late New Jack with a trash can of plunder. Mike Jackson is in his early 70s and still walked the top rope for the entire length of the ring. Fans were disappointed when he was among the last five or six left and ended up getting eliminated.

Thunder Rosa won a 3-Way Match over Mercedes Martinez and Deonna Purrazzo by pinning Purrazzo with a sunset flip as Purrazzo  was going for the Queen’s Gambit on Martinez. Rosa immediately left the ring to shake hands with the fans. Martinez and Purrazzo shook hands in the ring and hugged.

Broken Matt Hardy pinned NZO after the Twist of Fate. NZO cut a promo before the match and said he didn’t care which version of Hardy comes out. He called him “Matt Hardly”. Broken Matt Hardy came out doing the “delete” gimmick. He took the mic and was doing the eccentric accent. After the match, Hardy told the fans he’s glad to see them back after the last year and a half of challenging times. His wife was there watching in the front row.

Malakai Black pinned Buddy Matthews after the Black Mass in the main event. Black got on the mic after. He said he can’t seem to escape Matthews no matter where he goes. He said Matthews will always have a place with him no matter if it’s by his side or up against him. They shook hands.