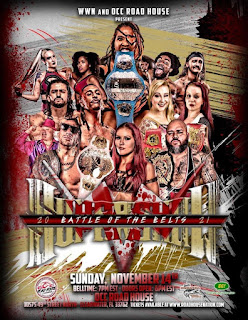 Trevin Adams and Alyssa Marino are the broadcast team.

ACW Tag Team Champions Jay Sky and Richard King beat Chris Metro and JC Metro when King pinned Chris Metro. Francisco Ciatso was doing guest commentary for the match and left the table to go to the ring. He pulled The Metro Brothers over to a corner of the ring to talk with them. They left with him to the back and dumped their current manager Skinny Vinny. Vinny tried to interfere in the match by distracting the referee but it had no effect in the outcome.

Trevin Adams mentioned that Alex Todd defeated Bobby Flaco for the ACW Cruiserweight Title in a pre-show match. He said it will be shown as VOD soon.

SHINE Nova Champion The WOAD pinned ACW Champion Lexi Gomez after the running hip attack into the corner. Only the Nova Title was on the line. Ron Niemi did a brief interview with The WOAD after the match and she said she wants Santana Garrett in a match.

ACW August Artois pinned Lucky Ali by holding the tights when Superstar Sean Davis distracted the referee from down on the floor. Davis cut a purposely annoying victory promo on behalf of Artois to agitate the crowd.

Anthony Greene pinned FIP Florida Heritage Champion Troy Hollywood after interference from Bryan Idol and Andy Brown when the referee was bumped. Hollywood was able to fight off Idol but didn’t Brown behind him. Brown gave him a package piledriver and helped Greene get the easy cover and the title win.

There were technical difficulties because you could hear someone on a hot mic saying “What the fuck? Get his fucking music up!”

Karam and “Superstar” Sean Davis came out to the ring. Davis said FIP World Champion Jon Davis wasn’t there are there was talk he had travel issues. He said Karam should win by forfeit. Jon Davis came out with the title and headed to the ring after a couple minutes. Someone in a mask ran up behind him and hit him in the leg with a baseball bat.

Karam pinned FIP World Champion Jon Davis in a couple of minutes to win the title after “Superstar” Sean Davis grabbed Jon’s injured leg from the outside allowing Karam to slam him down to the mat with ease for the pin. After the match, “Superstar” Sean Davis did another annoying interview and the masked person came out and hugged him. The person eventually unmasked and it was August Artois.

Marti Belle and Allysin Kay won the SHINE Tag Team Titles from Kimber Lee and Stormie Lee when Belle pinned Stormie Lee after a pedigree. Things backfired for Stormie Lee. She made a blind tag on Kimber as Kimber was about to deliver the swanton bomb on Belle. Kimber staggered on the top rope and took too much time which allowed Belle to get her knees up to block the move. Stormie was then the legal member of the team in the match with Kimber laying stunned on the mat unable to help her. Kay and Belle are still currently the NWA Women’s World Tag Team Champions as well.

Jaka and Sean Maluta won the FIP World Tag Team Champions in a 4-Way Tag Team Match over Hunter Law and Snoop Strikes, Steve Pena and Nino Cruz, and FIP Tag Team Champions Liam Gray and Adrian Alanis getting the fall on the team of Pena and Cruz.Gray and Alanis got in the face of the new champions. Adams said they didn’t have to be pinned or submitted to lose the titles.

Natalia Markova pinned SHINE Champion Ivelisse after a Future Shock DDT. Ivelisse attacked the referee after and took the title belt back. She glared at Markova then reluctantly handed the title over to her and hugged her. It looked like only a two count and Adams said Ivelisse believed she kicked out in time.