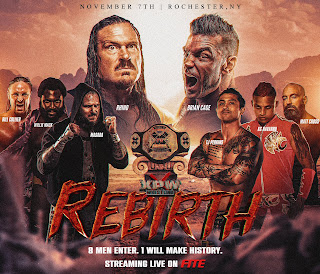 There will be an 8-man single elimination tournament tonight for the long time vacant title. Shane Douglas was the last champion. The company closed in 2003. They did a few reunion shows over the decades but now they are retuning full time. TV episodes will air on FITE TV for free and the first episode was posted up on 11/3/21. They’re scheduled to have a show in Los Angeles on January 22, 2022.

Producer/podcaster Rob Black and legendary former adult entertainment star Tom Byron (who has an autobiography coming out soon) are back in charge of XPW. Kris Kloss is back as the play by play announcer.

Facade (with Dani Mo) beat Cheech in a non-tournament match on the pre-show.

Willie Mack pinned Matt Cross after the Frog Splash in an XPW World Title Tournament Match. Good back and forth match with near falls making it look like either guy could have won it.

Masada pinned Rhino after a moonsault while a chair was placed in Rhino for extra impact in an XPW World Title Tournament Match. Kloss called it an upset.

Willie Mack vs. Masada and Brian Cage vs. TJ Perkins are the title tournament semifinals matches.

Vincent pinned G-Raver with an inside cradle in a Last Hell Standing Match. They put each other through some boards but in the end it came down to basic pro wrestling for the win.

Willie Mack pinned Masada with a cutback cradle in an XPW World Title Tournament Semifinal Match. After the match, Masada quickly jumped Mack and jammed the wooden skewers into Mack’s head then gave him a brain buster on a chair in the ring. Mack was carried out to the back with the skewers still stuck in his head.

Brian Cage pinned TJ Perkins after the discus lariat in an XPW World Title Tournament Semifinal Match. They shook hands after but TJ Perkins then attacked Cage’s left leg from behind. Kloss said both guys who are set to go to the finals might not make it now because of injuries.

Silas Young pinned Colin Delaney and Nick Ando in a handicap match by pinning Ando after a springboard Moonsault. Delaney left the match in fear at the end to leave Ando alone.

Shlak went to a No Contest with MadMan Fulton in a Steel Chairs Match after Fulton caused Shlak to bleed from a chair shot. The ring announcer said the NY State Athletic Commission stop it for blood. They got into a brief pull apart afterwards. A referee got hit by a chair. Fulton choke slammed a member of the security team.

Willie Mack pinned Brian Cage in the finals of the XPW World Title Tournament to win the title. Two referees were accidentally bumped and Cage and Mack beat up the third out of frustration. A fourth referee came in and counted the pin.
The fourth referee turned out to be Rob Black. He argued with the senior official and then assaulted him. Cage belt bashed Mack with the title belt and Black counted a fast three to declare Brian Cage the champion.
Cage leaves with the title as the show goes off the air.