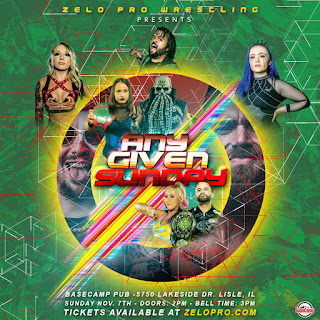 Zelo Pro Wrestling “Any Given Sunday” from Lisle, Illinois, USA 🇺🇸 at Basecamp Pub & Eatery on 11/14/21 live on FITE:

Jimmy Dee and Val Capone are the broadcast team.

Gringo Loco pinned Chico Suave after a diving cutter off the top rope when Suave missed a moonsault.

Zelo Pro GM Swoggle came to the ring to thank the crowd for coming out to watch pro wrestling on a Sunday afternoon during NFL season. Frank The Clown came out to interrupt him. Frank wanted a big match for Trevor Outlaw as soon as possible.Swoggle said in January it will be Outlaw vs. Blake Christian.

Missa Kate keeps taking away Jimmy Dee’s headset to sporadically do commentary with Capone. Kate had been scheduled to have a Casket Match against Blair Onyx but the match is postponed because Onyx has COVID.

Video was shown of Missa Kate wandering around outside complaining to the camera man that she’s bored but showed up with no match again today.

Joey “Jet” Avalon and Swoggle beat Zach Hendrix and Doc Simmons when Swoggle pinned Hendrix after Avalon’s spinning package piledriver. Swoggle made himself a tag team partner for replacement for Nick Colucci who was injured at a show last night in Milwaukee.

Capone interviewed Hendrix and Simmons. They said Swoggle threw them a curveball and they have to get back to the drawing board because they have a 1-3 record in Zelo Pro.

Sierra went to an apparent no-contest with Heather Reckless when Missa Kate left the broadcast table and attacked both women with a chair. Reckless looked like she was about to possibly win with Sierra in a calf crusher but Kate broke it up with the chair shot. There was no official decision announced but technically Kate hit Reckless first then Sierra.

Storm Grayson pinned Drama King Matt after a running knee shot while Matt’s head was against the ropes. They shook hands after and Matt raised Grayson’s hand.

Jonathan Gresham and Zelo Pro Women’s Champion Jordynne Grace beat Laynie Luck and Zelo Pro Champion GPA when Grace pinned GPA with a cradle after knocking him into Luck on the ring apron.

The next Zelo Pro show isn’t until January 2022 in Milwaukee at Turner Hall but no exact date was made public yet.