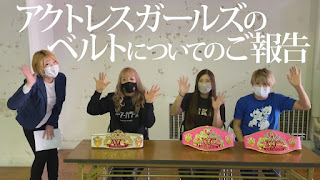 Actwres girl’z is ceasing pro wrestling operations as of today and the titles are being deactivated. The company will continue on with upcoming events described as “hybrid entertainment and live action theater”.

SAKI defeated Miyuki Takase for the AWG Championship at Korakuen Hall on 4/4/21. Her last defense was against Miku Aono on 11/6/21. There were only four champions in the company history: Saori Anou, Reika Saiki, Miyuki Takase, and SAKI. AWG held their first show in 2015, but the title wasn't created until 2018.

Kakeru Sekiguchi and Miku Aono defeated Maika Ozaki and Tae Honma for the AWG Tag Team Titles on 8/13/21 at Korakuen Hall.Their last defense was against Rina Amikura and Mii on 12/11/21 at Shinkiba 1st Ring. The tag team titles were just created this year and only two champions were crowned. Maika Ozaki and Tae Honma defeated Sekiguchi and Aono in the finals of a tournament to become the first champions on 2/11/21 at Shinkiba 1st Ring.