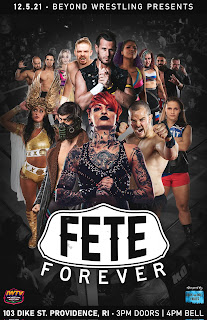 John Silver and Alex Reynolds beat Smart Mark Sterling and VSK when Reynolds pinned Sterling after throwing a fireball in his face when the referee was distracted.

Masha Slamovich beat Kimber Lee by Disqualification when Lee brought in a crutch and used it as weapon.

Rickey Shane Page pinned Slade after the GTF in a Hardcore Match. After the match, Smart Mark Sterling came out and said he had a message from Matt Cardona to RSP. He said the message was “Fuck You!” and then VSK attacked RSP from behind. Slade made the save. RSP and Slade challenged Sterling and VSK to a tag match in the future.

Traevon Jordan and Jaylen Brandyn won a 4-Way Tag Team Match over Bear Country, Bobby Orlando and Bryce Donovan, and Midas and Jay Lyon by getting the pin on Donovan.

Willow Nightingale pinned Max The Impaler after a DVD followed up by the Moonsault.

Dutch pinned Dan Barry after two Bossman Slams in a pile of thumbtacks in a No Disqualification Match. They used chairs, ladders, doors, a 2x4 wrapped in barb wire, and thumbtacks as the weapons. Vincent and Vita VonStarr came out after to congratulate Dutch and gloat at Barry.