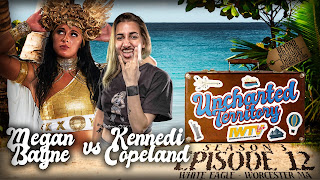 Beyond Wrestling “Uncharted Territory” Season 3 Episode 12 results from Worcester, Massachusetts, USA 🇺🇸 at the White Eagle on 12/23/21 live on IWTV:

Paul Crockett and Sidney Bakabella are the broadcast team.

Alec Price pinned Carlos Romo after the Su-Prize Kick. Price is currently the Limitless Wrestling Champion and he had the belt with him. He defends that title against JD Drake on 1/1/22 here at the White Eagle.

Megan Bayne pinned Kennedi Copeland after the tombstone piledriver. Copeland got in a lot of offense and the announcers put it over that it wasn’t a squash win for Bayne.

Masha Slamovich pinned Ryan Galeone after a series of kicks and the package piledriver.

The season finale of Uncharted Territory is next week.

As ring announcer Rich Palladino was getting ready to make the main event introductions, Anthony Greene came out as a surprise. Greene said he’s back for a couple of reasons. He said it’s been far too long since he’s been in a Beyond Wrestling ring on a Thursday night. He said he doesn’t have an opponent for the Limitless Wrestling show on 1//1/22 so they are letting him choose. He wants to face Becca. That show will air live on IWTV as well.

Matt Makowski beat Wheeler Yuta by submission after a Spanish Fly into an arm bar. With the win, Makowski faces Alex Shelley next week for the IWTV World Title on the season finale.