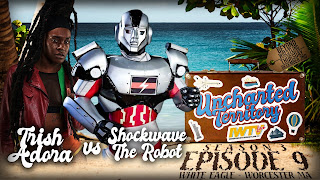 Rhett Titus pinned Carlos Romo after the drop kick to the face.

Megan Bayne will now face Tasha Steelz on the Beyond Wrestling show on Sunday. It was originally supposed to be Bayne vs. Leyla Hirsch but the company announced Hirsch will not be able to make the show. IWTV will air the event live at 4pm EST.

Brick City Boyz (Victor Chase and JCruz) beat The Air Show (Razor Wyng and Mach 10) when Chase pinned Razor Wyng after a double team finisher in a Tag Team Discovery Gauntlet Match. They will return next Thursday to face another team.

They showed a video promo segment with Smart Mark Sterling ranting about Alex Reynolds. Sterling and VSK will face Reynolds and John Silver on the Sunday show.

Trish Adora vs. Shockwave The Robot ended in a double pin draw. Adora had Robot down in a bridging pin and the referee counted to the three. The bell rang and ring announcer Rich Palladino declared Adora as the winner. The referee waived him off and signaled that all shoulders were down. He was about to raise both of their arms in the ring and the video feed cut out. IWTV has been having internet connection issues in the venue for much of this show.

B3cca and Alec Price beat Allie Katch and Effy when they both pinned Effy after a double team finisher as Katch was knocked out of the ring.

Slade pinned Masha Slamovich after a wicked chair shot over the head. Slade picked her up out of respect and let the crew help her to the back. This was nonstop stiff and brutal looking action. Slade attacked her from behind as she was making her way out to the ring. They brawled on the outside for several minutes with chairs doors. Slamovich put him through a door in the corner of the ring. Slade gave her a running powerslam on a chair.