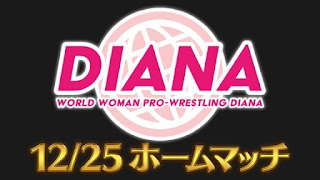 World Woman Pro-Wrestling Diana results from Kanagawa, Japan 🇯🇵 at the dojo on 12/25/21 live and free on YouTube:

Kyoko Inoue vacated the W.W.W.D. Singles Title on 11/20/21 after suffering an Achilles’ tendon rupture in a match on 11/14/21. The tournament to crown a new champion begins today and the finals will take place on 1/23/21 at Shinkiba 1st Ring.

Kakeru Sekiguchi won a 3-Way Match over Madeline and Miyuki Takase by pinning Madeline after a running STO in 9:45.

Nagisa Nozaki pinned Ayame Sasamura after the Noir Lancer High in a tournament match in 11:56.

Rydeen Hagane pinned Rina Amikura after a diving elbow drop in a tournament match in 9:58.

Jaguar Yokota and Haruka Umesaki beat Ayako Sato and Deborah K when Yokota pinned Deborah K with a clutch in 15:41.