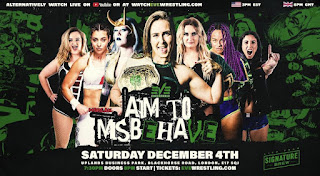 EVE Riot Grrrls “Aim To Misbehave” results from London, UK 🇬🇧 at Signature Brew on 12/4/21 live on YouTube. The first half of the show is free and it’s $10 USD per month if you want to see the whole event:

Charlie Morgan beat Nina Samuels in the dark match. They were not allowed to air in live due to Samuels’ NXT UK contract.

Laura Di Matteo pinned Rhio after a headlock driver. At one point during the match the crowd did a pretty good rendition of Duran Duran’s classic 1982 hit “Rio”. Post match, Di Matteo got on the mic and said she’s tired of getting screwed over for a title. She called out International Champion Kasey. She said if Kasey is still champion at the end of the night she’s coming for her. Charlie Morgan came out and wanted an International Title shot as well. Di Matteo was upset and said Morgan has only been back in action for five minutes yet thinks she deserves a title shot. Morgan said Di Matteo is always content waiting in the back of the line for an opportunity while she always takes opportunities. She challenged Di Matteo to a #1 con. match for the International Title on 1/7/21. Di Matteo accepted.

Rhia O’Reilly and Skye Smitson beat Debbie Dahmer and Heidi Katrina when Smitson pinned Dahmer after a rolling neck breaker as Katrina and O’Reilly were out of the ring. Smitson dedicated the win on camera to NightShade who is out of action with an injury. Before the match, O'Reilly got on the mic and gloated over Dahmer not having a partner tonight. She said Debbie Keitel is scared of the virus and she probably can’t stand Dahmer like everyone else. O’Rielly and Smitson then attacked Dahmer for a couple of minutes. Dahmer fought back as best as she could. Heidi Katrina came out to make it a tag team match.

EVE International Champion Kasey pinned Mila Smidt after the Killing Joke. They brawled on the floor and all over the brewery before getting back in the ring. Smidt did manage to avoid the Killing Joke a couple of other times in the bout but fell to it in the end.

Intermission (entering into the pay membership portion of the broadcast)

The Ava White came out and cut an arrogant promo. She said people should be saying “Thank You, Ava!” The crowd stated chanting “Fuck You, Ava!” instead. She condescendingly said they should all go ahead and “thank themselves”.

Emersyn Jayne won the EVE Title from Jetta in about 16:30 with a sudden pin that stunned Jetta and the crowd at first. This was a classic old school pro wrestling match the entire time with lots of mat wrestling and then Jayne hitting a missile drop kick followed by Jetta returning fire with a fisherman’s suplex off the top rope.