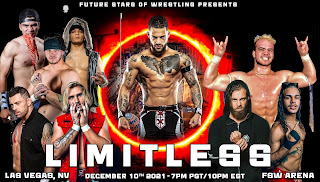 Tonight’s action features a tournament and 4-Way Finals Elimination main event. The winner gets a trophy and becomes #1 con. to the FSW No Limits Title.

Cut Throat Cody beat Jordan Oasis (there were technical difficulties and didn't catch the finish) in a Limitless Tournament Match.

Another video aired for Killer Kross and Scarlett Bordeaux coming in for the 2/4/22 show which is being called “Mecca VII: Doomsday”.

Trey Miguel pinned Matt Vandagriff after a meteora in a non-tournament match.

Davey Richards vs. Cut Throat Cody vs. Damian Drake vs. Jack Cartwheel in the Limitless tournament finals is up next.