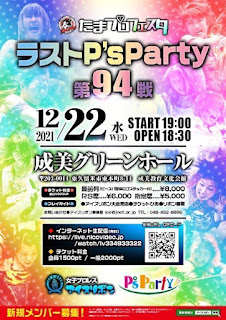 This is the last event ever for the “P’s Party”concept. Ice Ribbon is planning a new dojo event project with CMLL for next year at some point.

With “P’s Party” ending, the IW19 Title is once again getting deactivated. They brought it back in May 2020 during the early stages of the virus pandemic when they were doing YouTube streaming only broadcasts with no fans. Hamuko Hoshi defeated Maya Yukihi in a tournament final on May 31, 2020 to win the vacant title. The title was originally created for the former Ice Ribbon USTREAM show “19 O’Clock Girls ProWrestling” back in 2011. It was retired in 2013 when then IW19 Champion Tsukasa Fujimoto defeated then ICEx60 Champion Tsukushi in a title unification match.

Tsukushi Haruka is the final IW19 Champion. She defeated Hamuko Hoshi for the belt back in September 2021.

Haruka has an interesting place in the Ice Ribbon title history because she was also the very first IW19 Champion by defeating Tsukasa Fujimoto in a tournament final in March 2011. 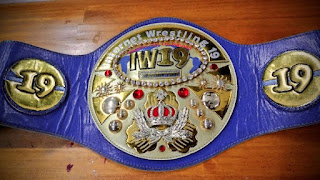 Tequila Saya and Rina Shingaki opened the show today to say goodbye to the brand which was started by Saya in 2018. Shingaki now works in the office for 2AW after her in-ring retirement last month.

Yappy and AKARI beat Cherry and Kiku when Yappy pinned Kiku in 8:47.

Suzu Suzuki pinned NATSUMI with a Dolphin Buster in 6:21.

Banny Oikawa pinned Madeline with a clutch in 7:06.

Totoro Satsuki and Itsuki Aoki beat Riko Kaiju and Chie Ozora when Satsuki pinned Ozora after a diving senton in 9:58.

Miku Aono pinned Nao Ishikawa after a lariat in 12:32.

Tsukushi Haruka and Momo Kohgo beat Asahi and Kaho Matsushita when Haruka pinned Matsushita after a diving double stomp in 14:21. Haruka thanked Saya for creating “P’s Party” after the match. Whatever the new dojo brand show ends up being with CMLL, Haruka will be the booker of it.