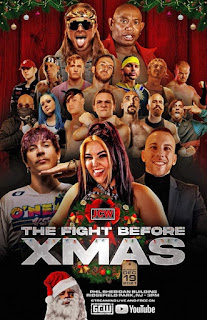 Grim Reefer pinned Brayden Lee after a DDT on a chair.

Dyln McKay and Marcus Mathers beat Bam Sullivan and SLADE when Mathers pinned Slade with a roll up as SLADE and Sullivan were attempting a Doomsday Device. The heels blamed the referee for their loss and beat him up afterwards.

Hoodfoot pinned Brandon Kirk after a lariat to the back of the head. Hoodfoot’ head was all bloody towards the end of the match after Kirk hit him with a big piece of a broken door.

Charli Evans and Everett Connors beat Masha Slamovich and Joshua Bishop when Evans pinned Slamovich after a lariat. The men brawled with each other to the back leaving the women by themselves in the match at the end.

2Hot Steve Scott pinned Archadia with a rope hanging driver after interference from Azrieal who was doing guest commentary during the match.