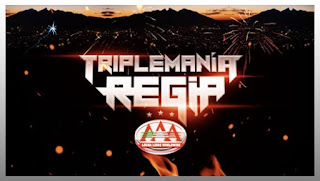 Leyenda Americana and Gran Mazo beat Venenoide and Enganoso in the dark match.

Lady Maravilla, La Heidra, and Lady Flammer beat Sexy Star, Lady Shani, and Faby Apache in a LumberJack Match when all three pinned Apache after rudo referee Tirantes Jr. hit Apache from behind on the ring and gave a fast three count. Earlier in the match, several of the Lumberjacks used their straps to chase Tirantes Jr. away back to the locker room. His father Tirantes Sr. took over for a bit as the referee. Then several rudo wrestlers acting as lumberjacks grabbed Tirantes Sr. by the leg to distract him so Tirantes Jr. could run back down to ringside and interfere and then resume being the original referee in the match.

A video aired of Taya Valkyrie with a huge smile on her face. She said she would be coming back and she wants the Women’s Title from current champion Deonna Purrazzo.

Konnan came out to the ring to cut a promo. He said Omega is out of action but will get a Mega Title shot at whoever wins the vacant title tonight whenever Omega is able to return from injuries. He also said The Lucha Brothers will lose to FTR tonight. Cibernetico then drove into the stadium on a motorcycle. He caused Konnan to leave the ring and cut a promo on him. He said he would get rid of Konnan in AAA. This was Cibernetico’s first time back in AAA since 2015.

Sanson, El Cuatrero, and Forastero won a 3-Way Tag Team Match over Abismo Negro, Jr., Arez, and Psicosis… Tito Santana, Mocho Cota Jr, and Carta Brava, Jr in a #1 con. Trios Titles Match by pinning Arez after driving him into a table set up in the corner of the ring. They used tables, doors, chairs, and light tubes. After the match, Cibernetico came out and speared Sanson, El Cuatrero, and Forastero. He stood unified in the ring with Abismo Negro, Jr., Arez, and Psicosis.

Goya Kong was out with ring Arturo Rivera on the ramp doing a plug for a Mayo dip. She was in the corner of Tito Santana, Mocho Cota Jr, and Carta Brava, Jr. in the last match. She  gave a couple of big splashes to their opponents but she was all smiles here.

Sam Adonis, Puma King and DMT Azul beat Dave The Clown, Murder Clown, and Chessman by pinning Dave but the cameras did catch exactly how it happened. As Chessman was about to be stretchered out Sam Adonis did a moonsault at him but overshot it. Estrellita was in the corner of Adonis and company again and she repeatedly interfered basically making it a 4 on 3 match.

The Lucha Brothers came out and cut a promo to hype up the crowd. They said they would be taking the titles back home. Penta talked Vickie Guerrero being there to manage FTR and she would learn some respect.

Guerrero and FTR then came out and they pulled legendary announcer Hugo Savinovich away from the broadcast table. They forced him to translate them insulting the crowd in English to Spanish. They said America is better and Lucha Libre sucks but they will be saviors.

FTR gave the middle finger to the Lucha Brothers and it broke down into a pull apart brawl. FTR was forced to the back by security. The match will take place later.

Willie Mack came out as the surprise tag partner of Laredo Kid.

Dragon Lee and Dralistico beat Laredo Kid and Willie Mack when Lee pinned Mack after a running knee strike. They cut a promo after the match and want a future tag team title shot and Lee also wants a shot at Kid and the Cruiserweight Title. Kid accepted the challenge.

AAA Tag Team Champions FTR beat Pentagon Jr. and Fenix in a Ladder Match when Vickie Guerrero interfered and threw powder in Pentagon’s face causing him to fall off the ladder and crash into a table in the ring. That allowed Dax Hardwood to easily grab the title belts on top of the ladder.

Cain Velasquez, Psycho Clown, and Pagano   beat Rey Escorpion, Taurus, and L.A. Park when Velasquez submitted Park to an arm bar after Rayo de Jalisco Jr. came out to the ramp and distracted Park. NGD then came out to the ring to confront Rayo. They wondered what he is doing there. Rayo said he unmasked Cien Caras (Cuatrero’s and Sanson's father). NGD was insulted and attacked by Rayo, Velasquez, Clown, and Pagano fought them off. Lots of boos from the crowd over the finish and promo segments afterwards.

The main event 5-Way Match for the vacant AAA Mega Title is up next. Kenny Omega gave up the title on 11/22/21 due to injuries.

Hijo del Vikingo won the 5-Way Match over Bobby Fish, Jay Lethal, Samuray Del Sol, and Bandido by pinning Del Sol after the reverse 450 Splash to win the vacant Mega Title. The baby face locker room came out to congratulate him and they put him up on their shoulders.