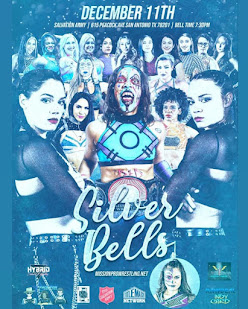 This event is a benefit for the San Antonio Salvation Army and a toy drive. MPW’s roster were around town working the red kettles around the area all week as well. Thunder Rosa and her family work tirelessly all year for a variety of charitable causes and now her MPW is part of their efforts.

Sam Laterna is the play by play announcer.

Casey Blackrose won a 4-Way Match over Johnny Rocket, Jess E. James, and Chip Garrison by pinning Rocket. This was a pre-show match featuring students from Hybrid School of Wrestling.

Ms. Michel and David Kidd beat Ki Vibez and Branden Vice when Michel pinned Vibez with a powerslam as their male tag team partners were fighting down on the floor.

Thunder Rosa ran out to the ring to help thank all of the sponsors.

The 7-Way Elimination Gauntlet Match for #1 con. to the MPW Title is up next. Jasmin Allure vs. Sadie Lee Moss starts in off. Nikita Knight is out next. La Rosa Negra is #4. Kayla Sparks out as #5. Ashley D’Amboise is #6. JennaCide will be out last:

La Rosa Negra, Jasmin Allure, and Nikita Knight pinned JennaCide by all piling on top of her at the same time.

Jasmin Allure pinned Knight by using feet on the ropes.

La Rosa Negra pinned Jasmin Allure after the Frog Splash to win the match and become the MPW Title #1 con.

MPW Tag Team Champions The Renegade Twins (Charlette Renegade and Robyn Renegade) beat Heather Monroe and Ray Lyn when Charlette pinned Lyn after a last second push assist from Robyn from outside the ring as Lyn was attempting a sunset flip on Charlette.

Thunder Rosa and Anakin Rosa beat Mighty Mayra and J.P. Harlow when Thunder Rosa pinned Mayra with the Thunder Driver. After the match, Thunder Rosa called several of the women on the roster to the ring to join her in giving Anakin splashes in the corner as a tradition to officially welcome him into the business.

The next show is 1/29/22 in Conroe, Texas back at Southern Star Brewery.