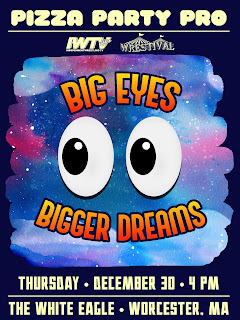 Robbie Radke pinned Big Game Leroy. Leroy had his “magical” Nintendo Switch with him and he was playing games on it while wrestling. He was able to “pause” Radke at times with it. Big Dust and Myles Millenium accompanied Radke to the ring and they were able to take the Switch away before the finish. The three heels then attacked Leroy after the match until Kennedi Copeland ran out to make the save to lead into the next match.

A Very Good Professional Wrestler and Dan Champion beat Boomer Hatfield and Shea McCoy in a Two Out Of Three Falls Match when AVGPW pinned Hatfield after the DDT in the 3rd Fall. Hatfield had to unmask in the ring as a result of the stipulation.