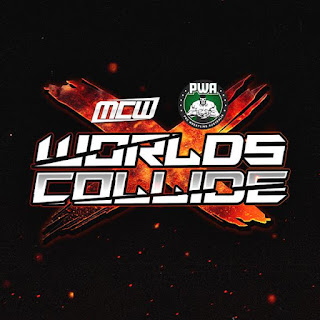 The card features a Best of Five series of matches between the two Australian pro wrestling promotions.

Slex pinned Lyrebird Luchi after the Flexection in the first match of the series to put MCW in the lead 1-0.

Gore pinned Jimmy Townsend after Kracker Jak interfered from down on the floor using a staple gun on Townsend. This was singles match that was not part of the rivalry series.

The Ballroom Blitz is up next to decide the vacant MCW Women’s Championship. A new person enters every minute. Eliminations are by over the top rope, pin, or submission. Kellyanne was the previous champion. The title was vacated when she announced her retirement in November.

Jessica Troy won the vacant MCW Women’s Title over Skylar Cruize, Cherry Stephens, Chanel Phoenix, Lily Blaze, Aysha, Kingsley, and Delta. Cruize and Troy started things off as #1 and #2. Troy submitted Cruize with an arm bar just as Stephens was coming out at #3. Troy submitted Stephens with the arm bar. Aysha was #4. Phoenix entered at #5. Kingsley was #6. Lily Blaze came in at #7. Phoenix and Blaze were eliminated by over the top rope. Delta was out last at #8. Delta eliminated Kingsley by over the rope and then pinned Aysha after a TKO. Troy eliminated Delta by over the top rope to win the Ballroom Blitz and the title.

Royce Chambers pinned MCW Intercommonwealth Champion Rocky Menero with an inside cradle to win the title. Menero was showing off by weightlifting Chambers as if he was in a gym. Chambers took advantage of him not taking things seriously and packaged him up for the pin.

Jack J. Bonza pinned Mitch Waterman after interference from Kingsley on the outside followed up by a lariat and then the Napalm Fire Thunder Driver to make it 2-1 for PWA Black Label.

Caveman Ugg, Mikey Broderick, and Tyson Baxter beat Mick Moretti, Mat Rogers, and Kai Drake when Ugg pinned Drake after the driver finisher for MCW to tie the series at 2-2.

Ricky South pinned Adam Brooks after interference from Mick Moretti followed by a piledriver to give the series victory to PWA Black Label 3-2. Their locker room came out to the ring to celebrate as the show went off the air.