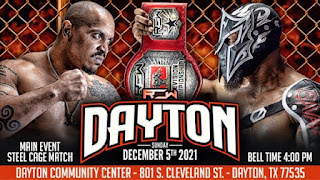 Booker T.’s Reality of Wrestling “Christmas Chaos 2021” (Part 1) results from Dayton, Texas, USA 🇺🇸 at the Dayton Community Center broadcast free on 12/19/21 on YouTube:
Booker T. was in his office talking about the card. La Familia knocked on the door and rushed in. They wanted to know why they didn’t have a match on the show. Booker said they could he could have a singles match but they have to decide between themselves on who it will be.
ROW Tag Team Champions Eli Knight and Malik Bosede beat Warren J. and Zack Mason when Bosede pinned Mason after Knight got in the ring and hit Mason in the face with one of the title belts as the referee had his back turned.
Booker was shown back in the office and brought in Clay Roberts. He set up a future match with Roberts against Tommy Bolton.
La Famila was in the dressing room trying to decide who should have the match for next week in Part 2.
Promise Braxton beat Hyan in the first ever ROW Diamonds Division Tables Match by power bombing her into a table in the ring.
Edge Stone pinned ROW TV Champion The Savage King in a Steel Cage Match to win the title. The announcers said this was also the first pin fall loss for The Savage King in his ROW career.