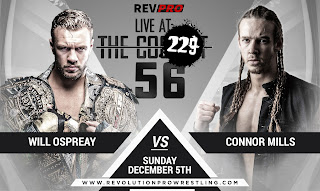 Alex Windsor, the new Undisputed British Women’s Champion, recently announced she suffered a shoulder injury. She will be out of action for the rest of the year but will return at an unknown date in 2022. REV Pro said they will not strip her of the title.

Lizzy Evo has been pulled from the show after getting injured on the Odyssey Pro event yesterday. She was supposed to take on Hannah Taylor today so no women’s match at all on the card now.

Chuck Mambo and TK Cooper beat Kyle Fletcher and Mark Davis. Fletcher and Davis attacked them after the match.

Will Osprey pinned Connor Mills after the Hidden Blade.

Thanks to Spencer Bentley for the results. This will be up on REV Pro On Demand in the coming days.