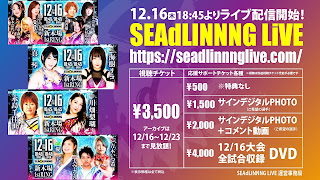 Nanae Takahashi announced she will be leaving SEAdLINNNG and her position as president of the company after the 12/29/21 Korakuen Hall show. She said she has been battling depression since 2017 and is continuing treatment for it. Back in October, she was dealing with ankle and knee issues. She said she feels like she is getting close to retirement. Currently, she and Hiroyo Matsumoto are the Beyond The SEA Tag Team Champions and they will defend the titles against Asuka and Makoto on 12/29/21. She is a former Beyond The SEA Champion and has previously held the Tag Team Titles with Arisa Nakajima.

Takahashi made her in-ring debut in 1996 for All Japan Women’s Pro Wrestling. During her time with AJW she held the WWWA Single Title twice, the WWWA World Tag Team Titles five times, the AJW Tag Team Titles twice, and the AJW Title.

She spent time in Ice Ribbon from 2009 to 2010. She is a former three time International Ribbon Tag Team Champion and a former Triangle Champion.

Takahashi helped Rossy Ogawa and Fuka create STARDOM in 2010. The first show was held in January 2011. She left the group in May 2015 and became a freelancer shortly before creating SEAdLINNNG that year.

Here are the results of the SEAdLINNNG show from Tokyo, Japan 🇯🇵 at Korakuen Hall on 12/16/21 live on SEAdLINNNG Live:

Yuu won a 3-Way Match over Chie Ozora and Itsuki Aoki by pinning Ozora in 9:30.

Chikayo Nagashima pinned Riko Kawahata after a Fisherman Buster in 9:06.