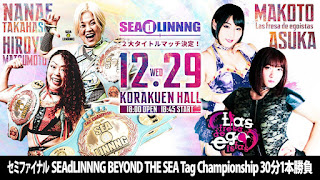 Yuu pinned Riko Kawahata after the Last Ride in 10:35.

Ayame Sasamura won a 5-Way Match over Chikayo Nagashima, Yumiko Hotta, Tsukushi Haruka, and Chie Ozora by pinning Ozora after a lariat in 7:49.

Mayumi Ozaki pinned Rico Kaiju after the Oza Kick in 13:35.

Rina Yamashita, Itsuki Aoki, and Yoshiko beat Tsukasa Fujimoto, Saki Akai, and Hanako Nakamori when Yamashita pinned Nakamori with Splash Mountain in 11:05. Yoshiko was the mystery tag partner and this was her return to action. She was out with injuries since March.

Makoto and Asuka won the Beyond The Sea Tag Team Titles from Nanae Takahashi and Hiroyo Matsumoto as expected when Makoto pinned Takahashi in 27:32.

Arisa Nakajima pinned Beyond The SEA Champion Ryo Mizunami with the DxD to win the title in 21:01. Nakajima said Takahashi could challenger her any time she wants.

The roster came to the ring to give Takahashi a farewell. She’s leaving the company and her position as president.