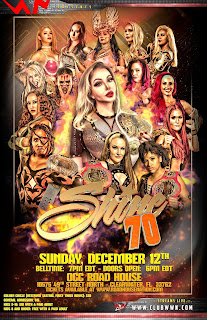 Trevin Adams opened the show in the ring. You couldn’t really hear what he was saying because they always insist on playing music full blast in the background while people are speaking on the mic. The show didn’t come on the air until 7:25 EST.

Zac Romero is on the call tonight with Adams and Alyssa Marino. Ayla Fox is ring announcer and interviewer.

Tracy Nyxx pinned Katalina Perez after The Hexacutioner finisher. Nyxx refused to do an interview with Fox after and tried to take the mic away from her.

Ashley D’Amboise pinned Tina San Antonio after a rolling neck breaker followed up by a Famouser. They really shouldn’t even bother with post-match interviews between the bad mic audio and the music constantly playing.

Santana Garrett beat SHINE Nova Champion The WOAD by count out. They were out on the floor. The WOAD tried to give Garrett the running hip attack against one of the ring posts but Garrett got out of the way. The WOAD hit the ring post instead then Garrett quickly got back in the ring to beat the count in time. After the match, Garrett did a dive off of the ring on The WOAD and they brawled to the back. Looks like the feud continues into 2022.

Devlyn Macabre vs. Tiffany Nieves went to a no-contest in a SHINE Sparkle Showcase when Megan Bayne walked in the ring after a couple of minutes and clotheslined both of them down. She demanded the match be made into a handicap match.

Megan Bayne beat Devlyn Macabre and Tiffany Nieves after giving them each a tombstone and pinning them both. She told Fox all of the locker room is on notice and they all will bow.

SHINE Tag Team Champions Allysin Kay and Marti Belle beat Erica Torres and Chelsea Durden after a double team finisher. After the match, a masked person got in the ring as a distraction and they ordered Torres, Durden, and Vipress to attack the tag champions. The person unmasked and it was Kelsey Raegan. She gloated and left to go to the back with the other Coven members.

Ivelisse regained the SHINE Championship by hitting SHINE Champion Natalia Markova with brass knuckles for the pin when The WOAD ran down to distract the referee. The WOAD helped attack Markova afterwards. Santana Garrett tried to make the save but Ivelisse hit her with the SHINE Title. Other members of the locker room ran out to clear the heels out of the ring.