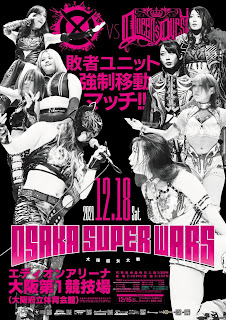 This event will only be available to order and watch on PIA until 12/21/21 then it gets posted up on STARDOM World.

Today’s card will feature a Unit Trios Tournament with members of STARS, Cosmic Angels, Donna del Mondo, and talent from Marvelous. The finals will be a Ladder Match with the winning team receiving a 10 million yen victory prize. Donna del Mondo are also defending the Artists of STARDOM Titles in their match to make things even more interesting.

Syuri beat Waka Tsukiyama, Mai Sakurai, and Lady C in a Gauntlet Match in 7:15. She pinned Tsukiyama first after a roundhouse kick. She got the fall on Sakurai with a sleeper hold. She won the match by submitting Lady C to a figure four leg lock. After the match, she walked over to the time keeper area and taunted World of STARDOM Champion Utami Hayshishita who was watching on. They will have their highly anticipated match with no time limit on the 12/29/21 pay-per-view. As Syuri went back to the locker room, the mystery masked person appeared again, this time with an associate wearing the exact same style of mask. They attacked Lady C, Tsukiyama, and Sakurai.

Artists of STARDOM Champions NatsuPoi, Maika, and Himeka (Donna del Mondo) beat Maria, Rin Kadokura, and Takumi Iroha (Marvelous) in a Unit Trios Tournament Match with the titles on the line when Himeka pinned Maria with a powerbomb in 15:25. DDM head to the Ladder Match finals and will now defend the titles in it too.

Mayu Iwatani, Hazuki, and Koguma (STARS) beat Tam Nakano, Unagi Sayaka, and Mina Shirakawa (Cosmic Angels) in a Unit Trios Tournament Match when Hazuki pinned Shirakawa with the Hazukistral Cradle in 13:49. STARS go to the finals and get a Artists of STARDOM Title shot as a bonus. It will be the main event.

Starlight Kid, Konami, Ruaka, and Saki Kashima (Oedo Tai) beat Momo Watanabe, Utami Hayashishita, Saya Kamitani, and AZM (Queen’s Quest) in the Captain Falls Elimination Match in 19:06. Konami and Hayashishita eliminated each other by sending each other over the top rope. Kashima pinned Kamitani. AZM eliminated Ruaka by submission. AZM eliminated Kashima by pin with the Azumi Sushi. Starlight Kid beat Momo Watanabe by Disqualification to win the match when Watanabe turned on AZM and hit her with a chair and then the referee with the chair. Watanabe willingly joined Oedo Tai as Kid laughed with delight. Watanabe and Kid cut gloating promos afterwards.Watanabe called herself The Black Peach. Syuri was on guest commentary for the match.

They had officials in the ring before the main event with a big briefcase. They opened it up to show proof that there was indeed 10 million yen inside of it to go to the winners. STARDOM executive producer Rossy Ogawa then did his usual title match photo op in the ring. The rules are they have to only grab the briefcase above the ring to win the match, the money, and the titles. And for some reason there is also an elimination stipulation on top of everything else going on but you can grab the briefcase at any point and not everyone on a team has to be eliminated.

Artists of STARDOM Champions NatsuPoi, Maika, and Himeka (Donna del Mondo) beat Mayu Iwatani, Hazuki, and Koguma (STARS) when NatsuPoi grabbed the briefcase in 18:42. Mayu Iwatani pinned Maika after a Moonsault off of the ladder. Himeka pinned Koguma after a lariat. Not everyone was eliminated. Cosmic Angels came out briefly after the match and they want a title shot on 12/29/21.