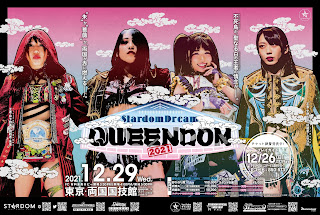 This ppv broadcast will only be available to order and view until 1/1/22 at 23:59 Japan Time. It will then be posted up on STARDOM World with the monthly subscription fee.

Stewart Fulton and Waka Tsukiyama are the English commentary team. Tsukiyama is also competing in the first match on the show.

Fukigen Death won a 5-Way Match over Rina, Saki Kashima, Lady C, and Waka Tsukiyama by pinning Tsukiyama with a roll up in 6:30. Fulton said Rina turned 15 yesterday along with her twin sister Hina. The twins made their pro wrestling debut in October 2018. (Their sister Hanan is 17. She made her debut in April 2017).

Hanan pinned Future of STARDOM Champion Ruaka with a Back Drop Suplex to win the title in 5:20. Mayu Iwatani, Hazuki, and Koguma came out to the ring to congratulate her. She hugged Ruaka.

Artists of STARDOM Champion Himeka, Maika, and NatsuPoi beat Unagi Sayaka, and Mina Shirakawa, and Mai Sakurai when Maika pinned Sakurai with the Michinoku Driver II in 13:23. Maika was put over like a dominant force as she gave drivers to Sayaka and Shirakawa just before the finish so they couldn’t make the save to break up the pin.

High Speed Champion Starlight Kid won a 3-Way Match over Koguma and AZM by pinning Koguma with a cradle after colliding her into AZM on the ring in 7:56. This was the fourth successful defense for Kid. She attacked Koguma and AZM afterwards. She forced one of her masks on Koguma then got in the face of AZM by taunting her with the title. Fulton suggested Kid will next defend the title against AZM in a singles match.

Giulia pinned Konami with the Glorious Driver in a very emotional match in 12:06. It was the return match for Giulia after being out with a neck injury for a few months, and it was the final match of Konami’s for the moment as she will be taking a medical hiatus. They both paid tribute to Hana Kimura and the former Tokyo Cyber Squad unit with their outfits and wrestling moves. Konami attempted the Jungle Buster of Jungle Kyona and Giulia gave Konami the Tiger Lily which Kimura used to do. They bowed to each other afterwards. Konami was given a card signed by the roster. Giulia had a flag that said “Never End” which is the catchphrase of Konami. Giulia got on the mic and said she was back and she will wait for Konami to return so they can face each other again. Konami said they had a great match and she thanked Giulia and everyone in STARDOM. They left the ring together draped in the “Never End” flag.

Fulton and Tsukiyama mentioned the big angle that happened on the Christmas show with Giulia being revealed as the leader of the mystery masked duo. The masked duo did not appear during the Giuila vs. Konami bout but they were backstage with Giulia during her post-match press conference. She once again said that they will be revealed as the newest members of Donna del Mondo in January.

Mayu Iwatani and Takumi Iroha beat Hazuki and Momo Watanabe when Iwatani pinned Hazuki after the Moonsault in 15:36. This was billed as a special 10th Anniversary STARDOM Reunion Match. Watanabe turned on Hazuki just as Hazuki was going to pin Iwatani after a brain buster. Watanabe then walked out of the match leaving Hazuki alone. Iwatani got on the mic after the match and thanked the crowd for coming to the last STARDOM show of the year. She said Oedo Tai is the enemy. Watanabe interrupted and gloated over Hazuki taking the fall and called her stupid. Hazuki said she will take Watanabe out next year. Iwatani, Hazuki, and Iroha bowed to the crowd and left the ring together.

Konami was shown on camera joining the Japanese broadcast team for guest commentary.

Saya Kamitani pinned Wonder of STARDOM Champion Tam Nakano after a Phoenix Splash to win the title in 21:59. Nakano put the belt around Kamitani’s waist as a show of sportsmanship. Kamitani said she’s been chasing the belt for a while and she will now be even more focused next year. Nakano said the belt suits Kamitani and she told her to be ready and watch out. Unagi Sayaka stormed in the ring and wants to be the first challenger next year.

SWA Champion Syuri pinned World of STARDOM Champion Utami Hayshishita to win the title after a high angle overhead powerslam in a no time limit match with both titles on the line in 36:33. Going into the match, both women had held the respective titles since 11/15/20. After the match, Syuri said she won the belt for her late mother. She said Hayshishita was the best rival ever. She thanked her for the match and they shook hands and hugged. Syuri told the crowd we only have one life and we should live it with no regrets. She said pro wrestling, shoot boxing, and MMA are all blended together and she will carry it all into 2022. She thanked the crowd for supporting STARDOM. She hugged Giulia at ringside, they are currently the Goddesses of STARDOM Tag Team Champions. She then went over and hugged Konami at the broadcast table. 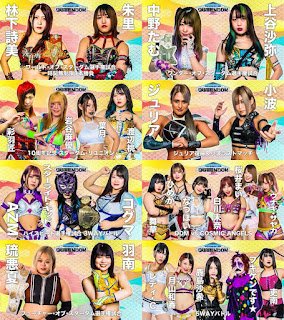