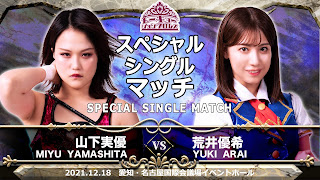 This is a special event as the pop idol group SKE48 will be performing songs after the third match. They are based here in Nagayo. Yuki Arai is a member of the group and she will be competing in the main event today. It’s been a big week of honors for her. A few days ago she was named Rookie of the Year by Tokyo Sports.

The Up Up Girls (International Princess Champion Hikari Noa, Miu Watanabe, and Raku) officially opened the show with a few songs.

Suzume pinned Moka Miyamoto after the Ring A Bell finisher.

SKE48 concert segment. Yuki Arai led the group into the ring to perform with them.