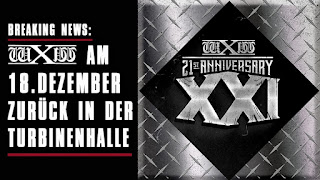 Bobby Gunns went to a Double Count Out with Michael Knight.

Absolutely Andy quickly won the wXw Shotgun Title from Norman Harras. It was so fast Andy didn’t even take off his ring jacket.

Robert Dreissker beat Vincent Heisenberg by Disqualification when Heisenberg hit him with a toolbox. There were run ins leading to huge brawl involving Baby Allison, Maggot, and Anil Marik afterwards.

WALTER pinned Cara Noir with a Fire Thunder Driver. This was the first time the two have face each other.

wXw Unified World Champion Axel Tischer pinned Jurn Simmons by poking him in the eyes and following up with a Liger Bomb.