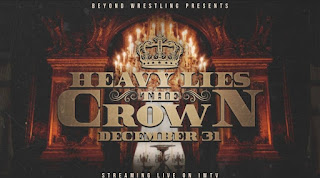 Beyond Wrestling and WWR+ “Heavy Lies The Crown 2021” results from Worcester, Massachusetts, USA 🇺🇸 at White Eagle on 12/31/21 on IWTV:

Paul Crockett and Sidney Bakabella are the broadcast team.

Eel O’Neal beat Vincent Nothing by submission with a key lock.

Max The Impaler pinned Jody Threat after a shoulder back breaker. After the match, Brian Milonas ran in and beat up Max with a chair. He cut a promo on Max and said it was pay back for issues they had in ROH. He sandwiched the chair between the turnbuckles and shoved Max face first into it.

They are doing a segment for IWTV Year End Awards. Dominic Garrini and Kevin Ku won Tag Team Of The Year.

Wrestler Of The Year Award goes to Daniel Garcia. He’s not there because of AEW contract. They read an award speech statement from him. AC Mack came out and interrupted the show and cut a promo. SLADE grabbed him from behind the curtain and dragged him to the back to let the show continue.

J.D. Drake pinned SLADE after a low block followed up by the Drill Bit and the Moonsault.

Megan Bayne beat Trish Adora by referee stoppage when Adora passed out in a triangle choke hold. Everyone thought Adora would be the one to upset Bayne and the crowd went silent at the finish. The announcers wondered who will be able to stop Bayne.

Vincent pinned Dan Barry with a roll up and holding the tights.

Moment Of The Year goes to Matt Tremont explodes from H2O on 10/31/21. He wasn’t there so Kennedi Copeland accepted on his behalf.

B3CCA pinned Willow Nightingale after ramming her head into an exposed turnbuckle that Alec Price set up on the outside followed by a 450 Splash. Price was ejected by the referee for interfering but came back out to celebrate with B3CCA. Jordynne Grace was supposed to defend the Impact Wrestling Digital Media Title against Nightingale but she Tweeted at 7pm EST saying she flew into town and then suddenly began to feel severely ill making her unable to compete.

Match Of The Year Award goes to Daniel Garcia vs. Wheeler Yuta at IWTV 100. Yuta accepted on behalf of both of them.

Wheeler Yuta and Tracy Williams beat Rhett Titus and Jonathan Gresham when Williams pinned Gresham after a piledriver. Gresham came out with the ROH World Title and Titus had the ROH TV Title. They all shook hands afterwards.

The Fans Bring The Weapons match main event is next and it will start right at 12am EST to ring in 2022.

Masha Slamovich pinned Kimber Lee in the Fans Bring The Weapons Match after a slam off of two chairs in the ring. They both wore white and they bled a lot. They used trash cans, a guitar, traffic signs, thumbtacks, a meat clever, and chairs as some of the weapons. They hugged after.

As Slamovich was leaving the ring, she was given the Breakout Star Of The Year. Slamovich said she want to prove in 2022 that she’s hardcore wrestling, pure wrestling, and every kind of wrestling.