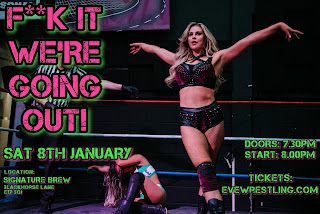 EVE Riot Grrrls of Wrestling “F*ck It, We’re Going Out!” results from London, UK at Signature Brew on 1/8/22 live on YouTube:

Amira Blair is off the show with an injury that she says will put her out of action for about 4 weeks. It happened in her loss against Skye Smitson on yesterday’s show. Blair is asking fans to consider buying some of her merchandise while she misses some bookings.
https://amirablair.bigcartel.com/
Charlie Morgan is off the show at the decision of EVE due to physical strain from yesterday’s match in her loss against Laura Di Matteo in their #1 con. EVE International Title match.
Rhia O’Reilly was off of this weekend’s shows due to COVID protocols.

EVE Champion Emersyn Jayne pinned Chantal Jordan after the Ganzo Bomb in a Round Robin Match. Hard hitting back and forth match that saw Jordan give the champion some tough and evenly matched competition.

THE AVA came out and the crowd gave her tons of heel heat and it made hard for her to talk at first. She called out promoter Dann Read and told him she’d be having a talk with him later about the disrespect.

THE AVA pinned Deborah Dahmer after a Neutralizer.

Charli Evans pinned Skye Smitson after a lariat. Smitson and Livvii Grace back jumped Evans after the match and grabbed Evans’ tag team title belt. Smitson got on the mic and said Evans was holding the titles hostage by not showing up. (Evans was stuck in her home country of Australia since March 2020 because of travel issues caused by the virus pandemic). Evans got on the mic and told Smitson she knows Rhia O’ Reilly will be coming back next month but so will Millie McKenzie. Evans and McKenzie will defend the EVE Tag Team Titles against O’Reilly and Smitson next month. (McKenzie has been away from EVE due to commitments with NXT UK).

Rhio pinned Chantal Jordan after her rope hanging spinning neck breaker in a Round Robin Match. EVE said in the chat room if Jordan had won, she would have had to beat Emersyn Jayne and force a tie breaker.

It will be EVE Champion Emersyn Jayne vs. Rhio for the title in the main event.

EVE Champion Emersyn Jayne pinned Rhio after the Ganzo Bomb with under 4 minutes left in the time limit. Jetta ran in after and got on the mic. She said Jayne is one of the best independent wrestlers on the planet and the fact she’s not signed is everyone’s loss but EVE’s gain. She wants a rematch on Feb. 5. Jayne nodded in approval and shook Jetta’s hand. This was Jayne’s third match of the weekend. She defeated Charli Evans yesterday in the Riot and Bleed Match.