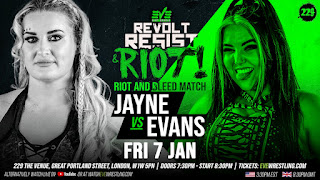 The first half of the show is absolutely free to watch but you have to be a paid member for $10 American to see the second half.

Lana Austin pinned Ivy after a rope hanging DDT in about 14 minutes of the 15 minute time limit. Ivy attacked her with a bat after the match.

THE AVA (Ava White) cut an arrogant promo and said she finally gets a match she deserves against a former EVE Champion. She said Jetta calls herself The Princess Diana of Wrestling “but we all know how that story ended”. Jetta came out and took offense to White’s comments about Princess Diana and dedicated the match to her.

Alexxis Falcon pinned Chantal Jordan after a DDT out of the ring corner.

EVE management revealed in the YouTube chat room that 12 people originally booked had to pull out of the show due to a combination of “COVID protocols and injuries”.

Skye Smitson pinned Amira Blair after a cobra clutch slam when Livvii Grace (who accompanied Smitson to the ring) got on the ring to cause a distraction. Grace then attacked Blair after the match and posed over her with Smitson.

Laura Di Matteo pinned Charlie Morgan after a tombstone piledriver in a #1 con. match to the EVE International Title (currently held by Kasey). Morgan hit the Impact DDT but Di Matteo got a foot on the ropes to break up the pin. Morgan hit a swanton but Di Matteo managed to trap her in her submission finisher. It looked like Morgan was going to tap out but she barely made to the ropes to break up the hold.

EVE Champion Emersyn Jayne pinned Charli Evans after a piledriver into thumb tacks in a “Riot and Bleed” Death Match. They went face to face sitting in chairs and traded off using staple guns on each other. Evans bled first over her eye. Jayne brought it a chair wrapped in barb wire but Evans threw a chair right at her so Jayne couldn’t use it. Big German suplex from Jayne followed by a drop toe hold into a chair and then a meteroa on Evans. Evans recovers and returns with some big kicks and a slam on the edge of a chair. They traded kicks to the face and head and ended up knocking each other down. Evans with a handful of wooden skewers but Jayne fought her off. Evans did eventually get the skewers in to the head to make Jayne bleed. Jayne then stuck skewers in Evans’ head but Evans seemed unbothered and smacked them into her own head further. Big kick from Evans as Jayne’s head was stuck in a chair. Evans grabbed the barb wire chair and hit Jayne over the back. Evans grabbed barb wire and put it around her own arm and gave Jayne a lariat with it but Jayne kicked out. Superplex by Jayne followed by a Michinoku Driver but Evans kicked out. Jayne threw Evans face first into barb wire hanging on the ropes but Evans kicked out. Backdrop suplex by Evans.

EVE will have another show tomorrow (1/8/22) at Signature Brew scheduled to start at 3pm EST. It will also air live on YouTube.