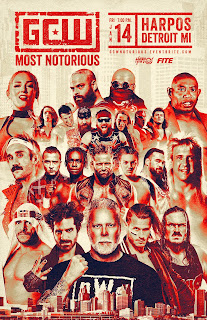 Game Changer Wrestling “Most Notorious”results from Detroit, Michigan, USA 🇺🇸 at Harpo’s on 1/14/22 live on FITE:

Kevin Gill and Emil Jay are the broadcast team.

Jordan Oliver pinned Leon Ruff with the Orange Crush. The crowd was shocked and booed a little because Ruff was defeated in his hometown.

WWE Hall of Famer Kevin Nash was introduced to the crowd to a standing ovation and “Welcome Home!” chants. He joked that the guys in the opening match were stealing all of his stuff. A fan asked where HBK was. Nash said “I don’t know, probably in NXT”. He said he wants to stay away from there because they probably would have fired him by now and he’s been on shaky ground ever since he went to WCW. He told the crowd he’s staying at the Greek Town Hotel in a suite they put him up in and he can see Comerica Park and Ford Field making him glad to be home. He then brought out Alex Shelley.

Shelley said he’s been a fan of Nash since he was a kid and then put over the young talent in the locker room.

Matt Cardona and Chelsea Green came to the ring wearing anti-GCW t-shirts. They cut promos on Joey Janela and Rhyno. They plugged the GCW show at Hammerstein Ballroom which is on 1/23/22. Rhyno finally came out and said if Green gets involved he’ll rip her in half.

Matt Cardona pinned Rhyno after hitting him with an ECW TV Title during a ref bump. Cardona accidentally hit the referee with the belt. Rhyno brought in a door and set it up in the corner of the ring while the referee was down and speared Green into it while aiming for Cardona. After the match, Cardona forced Emily Jay to announce him as the new ECW TV Champion because of beating Rhyno (who was the last official champion in the original ECW before it shut down in 2001),

Sabu was introduced out to the ring. Emil Jay told him he was an inspiration to fans and everyone in the GCW locker room. As Sabu was about to speak Atticus Cogar interrupted the segment by coming out to the stage. Cogar said when he was growing up Sabu refused to speak but now all he does is talk on Twitter and paid shoot interviews. He said Sabu has a broken back and broken bank account. Matthew Justice ran out and hit Cogar with a chair and then he threw Cogar in the ring. Sabu threw a chair in Cogar’s face. The whole thing led into the next match.

Atticus Cogar pinned Matthew Justice with a roll up and holding tights in a long and wild hardcore match. At the finish you heard someone blowing a whistle. It was Gregory Iron and Bobby Beverly holding Sabu hostage on stage causing a distraction. Cogar and Justice threw chairs back and forth at each other after the match. Justice got the mic and said he’s been watching concert footage from Harpo’s since he was a kid and it was a dream to wrestle here. He thanked Sabu and talked about Sabu inspiring a whole new generation of wrestlers. Justice said he’ll be in Chicago tomorrow for the GCW show there and he wants a match with Cogar and other members of 44OH.

A music video package featuring Jeff Jarrett aired. He will be in Chicago tomorrow.

The next GCW event at Harpo’s is on April 23.

Allie Katch and Effy beat 2 Cold Scorpio and Ricky Morton when Effy pinned Morton after Katch gave Morton a piledriver. Effy cut a promo about Jeff Jarrett after the match.

Ultraviolent Champion Alex Colon beat Hoodfoot by Camel Clutch submission after pouring salt in Hoodfoot’s cuts in an ultraviolent match with light tubes and a glass window in the ring used as weapon. This was a blood bath with several light tubes used. The ring was filled with pieces of glass and puddles of blood.