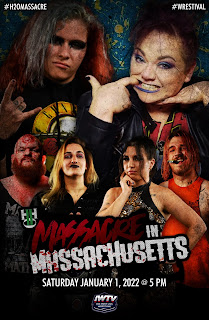 Matt Tremont and Kennedi Copeland came the ring. Tremont said Brandon Kirk and Kasey Catal couldn’t make the show. (They both have breakthrough cases of COVID). It was supposed to be them vs. Tremont and Copeland in Barbwire Massacre as the main event today. Tremont asked the crowd what they wanted to see instead. Copeland said she had an idea. She challenged Tremont to a singles match. Tremont agreed and said it would still be a Barbwire Massacre Match.

Bobby Beverly won a 5-Way Chairs and Chains Match over Drew Blood, Dale Patricks, Mitch Vallen, and Gregory Iron by pinning Blood after a low blow and a brain buster.

Masha Slamovich pinned Mickie Knuckles after slamming her on a bent chair.

H2O Tag Team Champions Chris Bradley and Kristian Ross beat GG Everson and Anthrax. The feed went out and came back on just as Ross and Bradley were celebrating the win.

Marcus Mathers pinned Anthony Greene by countering Greene’s finisher. Mathers was supposed to face Alex Shelley for the IWTV Title but Shelley has been out of action all weekend. Greene answered an open challenge. After the match, Greene said he took the match short notice and he wasn’t ready. He put Mathers by saying “when” Mathers beats Shelley he would like to face him again for the title.

Danny Havoc Hardcore Champion Lucky 13 won a 4-Way Match over Chuck Payne, Deklan Grant, and Devon Moore by pinning Grant after a diving double stomp as Grant’s head was sandwiched between a chair in the ring.

Kennedi Copeland beat Matt Tremont by submission using an arm bar with barb wire wrapped around the arm. The ring has barbwire on the ropes and they also used a chair and bats wrapped in Barbwire as weapons and some boards.