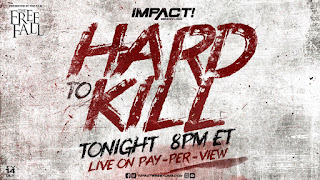 Impact Wrestling “Hard To Kill” results from Dallas, Texas, USA 🇺🇸 at The Factory on 1/8/22 live on FITE:

Tom Hannifan (the former Tom Phillips in WWE) and D’Lo Brown are the broadcast team.

Jake Something pinned Madman Fulton after a Black Hole Slam on the pre-show.

Chelsea Green and Matt Cardona were interviewed backstage. Green said it’s been four years since she held the Knockouts Title and she plans to be #1 con. by winning Ultimate X. Cardona mentioned that they were recently married and he said this pay-per-view is their honeymoon. Cardona is in the 3-Way Match later against Impact World Champion Moose and W. Morrissey.

The first ever Knockouts Ultimate X Match is up first on the pay-per-view. Chelsea Green vs. Tasha Steelz vs. Lady Frost vs. Impact Digital Media Champion Jordynne Grace vs. Alisha Edwards vs. Rosemary. The first person who climbs up to grab the Red X above the ring wins the match and becomes #1 con. to the Knockouts Title (currently held by Mickie James).

Tasha Steelz won the Knockouts Ultimate X Match after a bit of a struggling with Green over the Red X on the rope cable high above the ring.

They showed a pre-taped promo with Mickie James talking about being part of this year’s WWE Women’s Royal Rumble. She said she has to take care of business tonight against Deonna Purrazzo in a Texas Death Match.

Purazzo did a backstage interview and she was accompanied by Matt Rehwoldt. She hinted that he would interfere in the title match. Gail Kim interrupted and sternly said if he interfered he’s fired and Purrazzo will lose the match.

X-Division Champion Trey Miguel pinned Steve Maclin after a meteroa. The announcers said Miguel was the first to pin or submit him.

Backstage, Madison Rayne and Tenille Dashwood complained about Knockouts Tag Team Champions The IInspiration not being there because of COVID protocols so they can’t have the title match tonight. Rayne said it will happen on Jan. 27 now (the match will likely be taped as part of the Impact Wrestling TV tapings on 1/21/22 and 1/22/22 in Florida).

Ring of Honor’s Ian Riccaboni joined the broadcast for the ROH World Title match. ROH ring announcer Bobby Cruise was the guest ring announcer. He said the match will be held under Prue Rules.

Tasha Steelz was interviewed backstage. She said she made history by winning Ultimate X. She said no matter who wins the Texas Death Match later tonight, they have a date with her on the wrong side of the street.

Deaner vs. Rich Swann starts off Hardcore War. Someone else enters the match every 90 seconds. The match doesn’t end until all 10 men enter then it’s pinfall or submission to win.

Karl Anderson is out third.

Willie Mack evens it up at four.

Doc Gallows is #5 for the heel advantage.

Eddie Edwards out at #6.

Heath pinned Karl Anderson to win the match after Rhyno’ shore. After the match, Matt Taven, Mike Bennett, and Vincent immediately jumped all of the baby faces. PCO then joined in on the attack. The crowd chanted “ROH!” and D’Lo Brown wondered if this was an invasion. Maria Kanellis got in the ring with the ROH guys with a wicked smile on her face and she posed with them.

Backstage, Scott D’Amore was rushing around. He said he didn’t know what was going on either but he was going to call Baltimore (where ROH is based) to find out.

It’s another pro wrestling invasion angle that gives some of the ROH guys something to do before ROH allegedly returns to operations in Spring 2022.

Impact World Champion Moose won a 3-Way Match over Matt Cardona and W. Morrissey by pinning Cardona after the spear. Two referees were bumped in the match. Moose accidentally speared the first referee. Later in the match, Moose power bombed Cardona into the second referee and the interfering Chelsea Green in the ring corner. The first referee did recover to count the fall.

They announcer once again hyped Mickie James going to the WWE Women’s Royal Rumble in a few weeks. They said if she wins tonight she’d be a champion representing Impact Wrestling in the Rumble but Deonna Purrazzo wants to play spoiler.

Knockouts Champion Mickie James vs. Deonna Purrazzo in a Texas Death Match is the main event. You have to pin or submit your opponent first and then let them try to get to their feet to beat the 10 count. ROH Women’s Champion Rok-C was shown in the front row early in the match watching on.

Purrazzo got the first pin up on the stage after ramming a TV equipment container into James’face. James made it to her feet at the count of nine and she was bleeding from her forehead.

Purrazzo got another fall on James, this time in the ring by strangling her with her ring jacket on the ropes for a submission. James fell to the floor but got up by the count of eight.

James got her first pin on Purrazzo with a Thez Press off the ring on the floor. Purrazzo was bleeding after a guitar shot by James before that. Matt Rehwoldt ran down and picked Purrazzo up to beat the count. The announcers said he didn’t touch James so he’s not fired.

Purrazzo pinned James after putting her through a table in the ring. James made it up by nine.

James hit Rehwoldt with the guitar to stop him from interfering.

James pinned Purrazzo after a DDT into thumb tacks. She buried her with chairs and a broken table so she couldn’t beat the count. James goes to WWE for the Rumble as Champion.