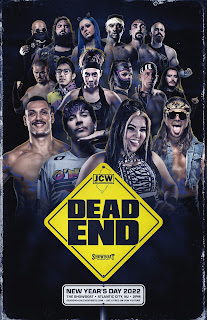 Frontman Jah pinned Edith Surreal after a super kick in the ring corner.

Dylan McKay went to a no-contest with JJ Garrett when SLADE tossed in a bunch of weapons in the ring and the referee ran off in fear. SLADE attacked McKay as Garrett ran to get Jimmy Lloyd to help make the save. Garrett and McKay shook hands. Ring announcer Emil Jay said the official decision was a no-contest.

Big Vin pinned 1 Called Manders after a power piledriver. They fist bumped in respect after.

Janai Kai and Yoya beat Azrieal and Steve Scott when Kai pinned Scott after a double team finisher as Scott collided with Azrieal on the ring. Azrieal attacked Scott after the match. SLADE got in the ring and ran Azrieal off with a chair and then hit Scott with the chair.

Grim Reefer pinned Steve Sanders after a slam off the top rope.

Joey Janela beat Cezar Bononi by half crab submission. Janela got on the mic and said he didn’t know what was next for Bononi. He said Bononi deserves more bookings and he only gets couple of minutes a week to show off. They shook hands but Bononi held Janela in place so SLADE could come in with the chair and attacked Janela. SLADE gave Janela a choke slam as Bononi egged him on.

Charli Evans pinned Everett Connors after a Backdrop Suplex and a lariat in a Loser Leaves Town Match. Connors got down on a knee and asked Evans to leave town with him. She agreed and they hugged and kissed in the ring. (Evans is headed to the UK for shows. She’ll be on the EVE show on 1/7/22 against EVE Champion Emersyn Jayne live on YouTube).