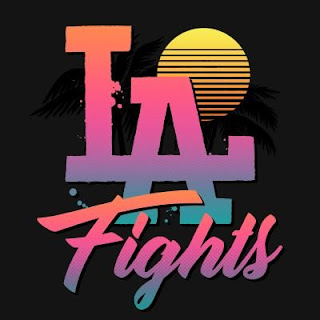 Sean Waltman joins Marquez on commentary. Waltman asked Marquez how long it’s been since he’s been in the broadcast booth. Marquez said it’s been about ten years and admitted he didn’t know how to call half of the moves. He has been a long time promoter, producer, director and ring announcer with Championship Wrestling From Hollywood, United Wrestling Network, NWA, NJPW USA, and more since 1988.

Cassel and Waltman are now the broadcast team. Marquez said they only wanted him in for two matches.

Revolving commentary teams. Shawn Scoville joins Waltman now. The next show is Feb. 26 as part of a double header with Game Changer Wrestling. The LA Fights show will remain free and live here on YouTube but the GCW event will be on FITE.

Bad Dude Tito pinned Sandra Moone after a Tombstone Driver. Moone drove Tito through a door set up in the corner of the ring during the match. Tito gave her two power bombs followed by a DVD but Moone kicked out.

Cassel and Del Mar are on the call for the main event.