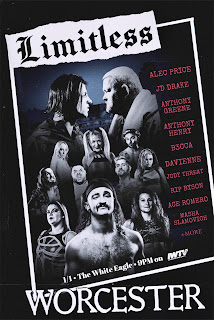 B3CCA beat Anthony Greene by submission with a Muta Lock set up by a 450 Splash. Greene took one of B3CCA’s scrunchies and put it on his head as a show of respect.

Ava Everett, Aaron Rourke, and Ricky Smokes beat Love, Doug and The Mane Event (Midas Black and Jay Lyon) when Everett pinned Lyon holding tights. Waves And Curles were supposed to be the partners of Love, Doug but they're out of action with COVID.

Jody Threat pinned Mortar after an F-5. Davienne was supposed to be the original opponent for Threat but she’s out with a concussion.