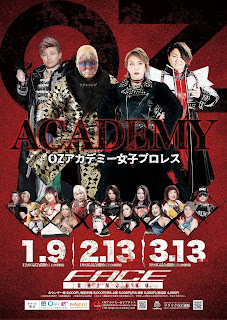 Today’s OZ Academy show at Shinjuku FACE in Tokyo was evacuated before the fourth match because of a fire in the basement of the building. The fire department arrived on the scene to get everything under control “Wrestling… with Demons” corespondent Tomi Yamada was there and she told me everyone is safe but the rest of the show ended up getting cancelled. She described it as an “unnerving situation” but nobody panicked.

Yamada also says the Sendai Girls show that was scheduled for today at the venue at 18:00 Japan Time will still be able to take place. She plans to be there for it too.

For what it’s worth, here where the results of what was supposed to be a six match OZ Academy card which aired live on Nico:

Kekeru Sekiguchi won a 3-Way Match over Maya Yukihi and Tsubasa Kuragaki by pinning Yukihi in 4:27.