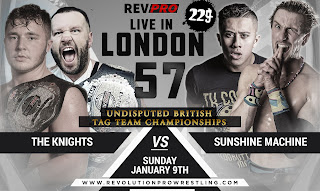 Callum Newman and JJ Gale beat Joshua James and David Francisco when Newman pinned James. The match ended up being a short 2-on-1 due to Francisco getting injured in the first couple of minutes. Dan Moloney attacked everyone afterwards.

Undisputed British Women’s Champion Alex Windsor came to the ring to cut a promo. She’s been out of action with an injury. It looked like she was going to announce vacating the title but it was a swerve. She said she was doing an Open Challenge defense for the High Stakes show at York Hall on 1/29/22. Charli Evans came out to answer the challenge.

Luke Jacobs pinned Kid Lykos after a driver. Robbie X was the scheduled opponent for Jacobs but he’s out with an injury.

Chuck Mambo and TK Cooper won the Undisputed British Tag Team Titles from Ricky Knight Jr. and Zak Knight in the main event. Zak was a substitute for Roy Knight who was not medically cleared to compete.