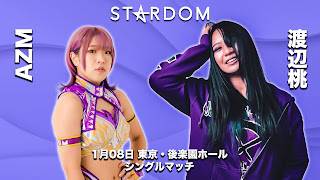 STARDOM results from Tokyo, Japan 🇯🇵 at Korakuen Hall on 1/8/22:

Before the first match, Momo Kogho came to the ring and spoke to the crowd. She said she would like to have a chance to wrestle for STARDOM. (She was with ActWres girl’z which recently ended its pro wrestling operations. She’s also had matches in Ice Ribbon and Pro Wrestling WAVE). Unagi Sayaka strutted out confidently and interrupted her. She said she wanted Kogho to have an “assessment match” to see if she was ready. Kogho agreed. Sayaka then left the ring as fast as she came in to let Kogho bow to the crowd.

Koguma won a 3-Way Match over Himeka and Lady C by pinning Lady C in 5:46.

Giuila and Thekla beat Starlight Kid and Ruaka when Giuila submitted Ruaka to the Bianca finisher in 9:10.

STARDOM has another show tomorrow here at Korakuen Hall. Giuila and Syuri will defend the Goddesses of STARDOM Tag Team Titles against Hazuki and Koguma in the main event. Thekla will face Saki Kashima.

Syuri, MARAI, and Maika beat Mina Shirakawa, Mai Sakurai, and Waka Tsukiyama when MARAI pinned Shirakawa in 12:11. After the match, MARAI challenged Syuri for the World of STARDOM Title and she agreed. In addition to that title news, Syuri announced that she is relinquishing the SWA Title because she is the new World of STARDOM Champion and also currently half of the Goddesses of STARDOM Tag Team Champions.

Wonder of STARDOM Champion Saya Kamitani and Utami Hayshishita went to a 20-minute time limit draw with Tam Nakano and Unagi Sayaka. After the match, Sayaka challenged Kamitani for the Wonder Title.

Momo Watanabe beat AZM by referee stoppage in 15:53 after a kick to the head with an illegal object placed in her boot to cause extra damage. Watanabe gloated afterwards. She said beating AZM was just the first step to Oedo Tai’s total destruction of Queen’s Quest. Starlight Kid then got on the mic to cut a promo on AZM as she was recovering from being knocked out by the kick. Hayshishita shoved Kid away and Watanabe got in Hayshishita’s face.