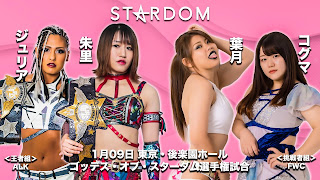 STARDOM results from Tokyo, Japan 🇯🇵 at Korakuen Hall on 1/9/22:

AZM is off the show due to injuries from her match yesterday against Momo Watanabe. I assume this is a storyline injury to sell Watanabe’s referee stoppage knock out victory by using a illegal object in her boot.

Momo Watanabe, Starlight Kid, Rina, and Ruaka beat Saya Kamitani, Utami Hayshishita, and Lady C when Watanabe pinned Lady C with a reverse B Driver in 17:08. Watanabe and Hayshishita will have a match on 1/29/22 in Nagoya. The show is being called “Nagayo Supreme Fight”. I assume it will be another pay-per-view.

Hazuki and Koguma won the Goddesses of STARDOM Tag Team Titles from Giuila and Syuri when Hazuki pinned Giuila with the Hazukistral Cradle in 16:55. Himeka and Maika came out to challenge the new champions.