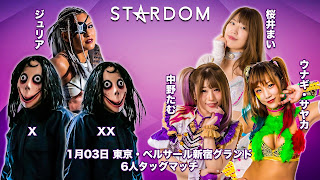 I don’t know how long this show will remain up on YouTube. It could be pulled at any point and moved to STARDOM World as they see fit.

Rina, Ruaka, and Stardom beat Waka Tsukiyama, Lady C, and Mina Shirakawa when Ruaka pinned Tsukiyama after the Freezer Bomb in 10:39. After the match, Kid said Oedo Tai wants a title shot at the Artists of STARDOM Titles. She told STARDOM Executive Producer Ross Ogawa (who was sitting at the time keeper’s table) to make the match.

Syuri, Maika, Himeka, and NatsuPoi beat Mayu Iwatani, Hazuki, Koguma, and Hanan when Himeka pinned Koguma with the running powerbomb out of the corner in 13:35.

Saya Kamitani, Utami Hayshishita, and AZM  beat Momo Watanabe, Fukigen Death, and Saki Kashima when AZM submitted Kashima with the Numero Uno in 16:21. After the match, all of the other Oedo Tai members rushed in the ring and attacked AZM. A big brawl broke out and Lady C ran in to help out AZM, Kamitani, and Hayshishita. AZM challenged Watanabe to a singles match. Hayshishita asked Lady C to join Queen’s Quest and she accepted.

During the ring entrance of Donna del Mondo at the main event, the masked duo immediately unmasked to reveal themselves. They are Mirai Maiumi and Thekla. Maiumi left Tokyo Joshi Pro Wrestling back in September and Thekla left Ice Ribbon at the end of November. I think everyone was surprised that they were immediately revealed instead of waiting until during the match or after the match.

Giulia, Mirai Maiumi, and Thekla beat Tam Nakano, Unagi Sayaka, and Mai Sakurai when Thekla pinned Sakurai in 19:37 after the Poisonous Spider Death Drop. Giulia gloated after the match. Thekla speaks multiple languages. She spoke in English and introduced herself to the crowd then in Japanese. Mirai spoke next. She’s only going by the first name in STARDOM. Giulia brought in Syuri, Himeka, Maika, and NatsuPoi to join them all in the ring and pose for the cameras as Donna del Mondo is in full force.