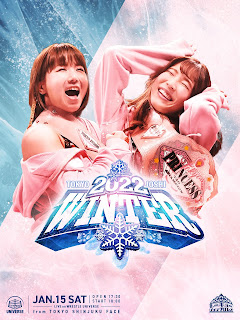 The company announced Sakisama and Mei Saint-Michel will return on the 2/11/22 show at Korakuen Hall. They last appeared together in TJPW back in October then Mei (as Mei Suruga) had a short stint in AEW in November. She returned to Japan in December and continues to wrestle as a major part of Choco Pro. Sakisama (as Saki Akai) has been appearing in DDT, SEAdLINNNG, Sendai Girls, and Marvelous ever since.

Moka Miyamoto beat Kaya Toribami by submission with the Rashomon.

Yuki Kamifuku and Asuka beat Marika Kobashi and Raku in a Max Heart Tournament 2 Round 1 Match when Asuka pinned Kobashi with a sit out powerbomb. Asuka and Kamifuku move on to face Miyu Yamashita and Maki Itoh on 1/20/22.

Hyper Misao and Shoko Nakajima beat Yuka Sakazaki and Mizuki in a Max Heart Tournament 2 Round 1 Match when Nakajima pinned Mizuki with a Northern Lights Suplex. They go on against Miu Watanabe and Rika Tatsumi on 1/20/22. Nakajima is also the next challenger for Princess of Princess Champion Miyu Yamashita.