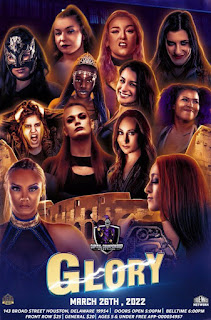 Alyssa Marino is the play by play announcer.

The opening match is a Gauntlet Match to crown the inaugural CCW Network Champion.

Savannah Stone beat Catalina Garcia. It ended in a confusing finish. Stone ripped off Garcia’s mask and the referee stopped the match. Stone then arrogantly walked to the back with the mask. The referee covered Garcia’s head to hide her identity and helped walk her to the back. The ring announcer did not announce an official decision but Marino on commentary said Stone won because Garcia was not able to continue after having her mask ripped off. She admitted that under normal circumstances it would have been a Disqualification by someone taking a mask.

Willow Nightingale and Edith Surreal beat Vita VonStarr and Gia Scott when Surreal submitted Scott. VonStarr and Scott argued and got into a shoving match to the back afterwards.

CCW Champion KiLynn King pinned Christina Marie after King Falls. Kayla Sparks and Kat Spencer came out to congratulate her. King cut a victory promo and put over Sparks. They posed together for a photo op. Spencer jumped Sparks from behind. King shoved Sparks away and told her to go to the back.