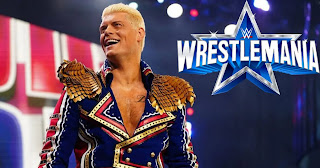 Cody Rhodes pinned Kevin Owens after the Crossroads in the dark match after Raw went off the air tonight in Dallas. After the match, he got on the mic and thanked the crowd for welcoming him back. He said no matter what you’ve heard about him he loves pro wrestling and the pro wrestling fans. He asked the crowd who was planning on going to WrestleMania next year. He acknowledged his cousin in the crowd and called the fans members of his family as well. He told everyone to drive safe and thanked them for coming to the show.