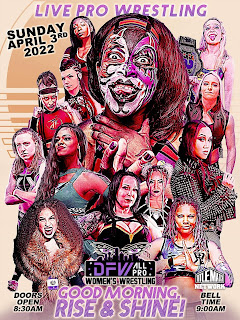 Big Plo and Emily Taylor are the broadcast team. Faith is the ring announcer. This show started at 9am CST on a very long weekend of pro wrestling.

Killa Kate beat Viva Van by arm bar submission. Kate will be part of the WOW reboot which is scheduled to be taped for airing in syndication this fall.

Jessica James pinned Danika Della Rouge with a bridging backslide. James is back in action after taking a few years off from pro wrestling.

Danni Bee beat Zoey Skye by count out when they were brawling on the outside and Skye accidentally ran into the ring steps while trying to smash Bee into them. Bee will also be part of the new season of WOW.

ROW Diamonds Division Champion Raychell Rose pinned Hyan after the Off With Her Head finisher. Hyan is back in American after a tour of the UK with REV Pro and EVE. She also worked for Zelo Pro this weekend.

LuFisto pinned Alejandra The Lion (with Nastico and Lou Gotti) after the Burning Hammer. LuFisto kicked Nastico in the crotch when he tried to go after her after the match.

DFW All Pro Women’s Champion Holidead won a 3-Way Match over Janai Kai and Tootie Lynn by pinning Lynn. Holidead is back in America after a brief UK tour with Progress Wrestling. She also worked Mission Pro Wrestling and MLW on this Texas WrestleMania Weekend.