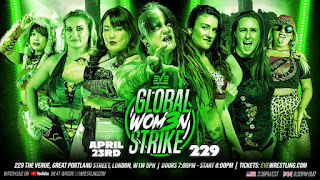 EVE Executive Producer Dann Read opened the show and told the crowd that he had bad news. Max The Impaler had travel issues to the UK and will not make the show. Lizzy Evo is out with a jaw injury. Ivy came out to interrupt the announcements and wanted to get on with the show.

Sophia Lang and Dann Read are the broadcast team.

Rhio pinned Ivy after spin kicking Ivy’s bat into her face (when Ivy tried to use it as a weapon) followed up by a rope hanging spinning neckbreaker.

Session Moth Martina pinned The AVA after a Code Breaker.

Emersyn Jayne pinned Skye Smitson with the Gonso Bomb. Before the match, Smitson cut a promo and called out Debbie Dahmer who was watching the show in the crowd. She said it was fitting because Dahmer only belongs in the crowd. Dahmer got in the ring and wanted to fight. Smitson said she was booked against Jayne tonight. She caught Dahmer off guard and attacked. Jayne ran down to make the save and the match began.

Millie McKenzie beat Nina Samuels in the dark match. They’re not allowed to be shown live due to WWE’s NXT UK stipulations.

Tokyo Joshi Pro Wrestling’s Princess of Princess Champion Shoko Nakajima pinned Alex Windsor after the diving senton with just 43 seconds left in the time limit. Read thanked everyone at TJPW on commentary for having Nakajima on the show. He said they are the most professional and easiest group he’s ever had the pleasure of working with. He said he can’t wait for more TJPW stars to come to EVE and for EVE stars to go there. (TJPW is very easygoing compared to a couple of other Joshi groups. They actually encourage fans to share pics, GIFs and results online to have fun and help in the international advertising of the company).

Emi Sakura pinned Charlie Morgan after The Queen’s Gambit. Sakura has had a hectic international traveling schedule the past couple of weeks. She was back in Japan at the end of March to early April for Choco Pro shows. She flew back to America (where she now lives) to appear on a few AEW Dark Elevation tapings, including the one in Pittsburgh a few days ago. Now she’s back here in the UK.

EVE Champion Jetta pinned Kasey with a reversal. Jetta got her nose busted up pretty good in the match. She was noticeably bleeding but was able to finish. Kasey back jumped her after the match but Charlie Morgan and Alex Windsor ran in to make the save.

The next show in on May 7 at Patchworks for EVE’s 12th Anniversary.