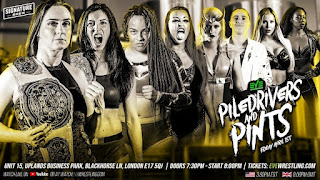 EVE Riot Grrrls of Wrestling “Piledrivers and Pints” results from London, UK 🇬🇧 at Signature Brew on 4/1/22 live on YouTube:

EVE Champion Jetta pinned Skye Smitson after a lariat in 11:25. Rhia O’ Reilly and Nightshade tried to interfere at the end but it backfired. Smitson and Nightshade got into a big fight after. Promoter Dann Read and more referees came out to pull them apart. O’Reilly got on the mic and said they needed to settle things and straighten it all out tonight. She asked Read to make a match between the two. Read made Nightshade vs. Smitson official for later on in the show and it will also be a SHE1 Qualifier.

The AVA pinned Rayne Leverkusen after a TKO in 9:35. This was the EVE debut for Rayne and she seemed to be an instant fan favorite at the venue. It wasn’t the easy victory that AVA expected at the start.

Rhia O’ Reilly pinned Natalie Skyes after the Rhiajustment in 9:50.

Charlie Morgan and Alex Windsor beat Rhio and Ivy when Morgan pinned Ivy after a Swanton set up by a powerbomb from Windsor in 14:19.

Intermission- the company reported that this is the final show here at the brewery. They will have their Global Women Strike 3 event on 4/23/22 at 229 The Venue with Tokyo Joshi Pro Wrestling’s Princess of Princess Champion Shoko Nakajima coming in. Matches announced for the show so far are Emi Sakura vs. Charlie Morgan and Max The Impaler vs. Session Moth Martina. The SHE1 shows will be four shows taking place over two days on 7/18 and 7/19 at 229 The Venue. They’ll have a show on May 7 at Patchworks.

Debbie Keitel pinned Mercedez Blaze after a pedigree with Blaze covered in wrapping paper in 8:54. Today is Keitel’s birthday.

Skye Smitson pinned Nightshade after a cobra clutch slam in 6:41 of the SHE1 Qualifying Match. They patched up their differences after the match and posed with Rhia O’Reilly.