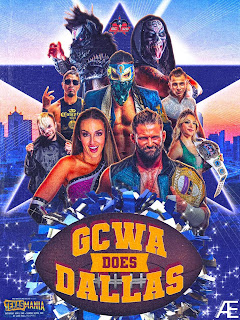 GCWA Champion Ben Galvan won a 3-Way Match over Low Rider and Joe Alonzo by throwing Low Rider down to the floor and pinning Alonzo to steal the win.

GCWA Women’s Raychell Rose pinnex Chelsea Green after the Off With Her Head.

Matias Suarez won a 6-Way Match over Adrian Cruz, Corvus, Benny Dreamz, Tyler Wolfe, and Richie Garcia by pinning Garcia. Garcia had this planned out as an Open Challenge Match thinking it would be a singles but five others ending up answering it.

Rey Horus and ASF beat Golden Dragon and Gringo Loco when ASF pinned Dragon with a roll up.

Internet Champion Matt Cardona pinned Gino Medina after a low blow and pulling the tights when Chelsea Green ran out and pulled the referee out of the ring as Medina was about to win. After the match, Cardona accidentally hit Green in the face with the Internet Title as they tried to double team Medina.