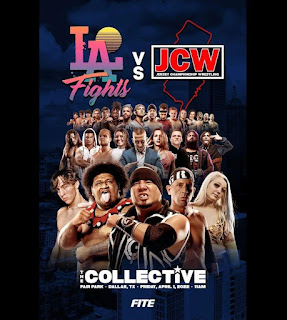 Jersey Championship Wrestling vs. LA Fights results from GCW The Collective in Dallas, Texas, USA 🇺🇸 at Fair Park on 4/1/22 live on FITE:

Big Vin pinned Juicy Finau after a powerbomb out of the corner. JCW 3- LA Fights 1.

Billie Starkz pinned Sandra Moone with a Dragon Suplex. They hugged afterwards and walked out together. JCW 4- LA Fights 2.

B-Boy pinned Grim Reefer after a DVD into a door sent up in the corner of the ring followed up by a brain buster. JCW 4- LA Fights 3.

Dark Sheik pinned Charles Mason with a driver. Mason brought out a long cord and wrapped it around Sheik’s throat and tried to hang her on the lighting fixture above the ring at the finish. The entire LA Fights roster made the save. JCW’s roster then stomped Mason. The rivalry ended in a 4-4 tie. There was no truce between the two brands and the rosters got into a big brawl to close the show.