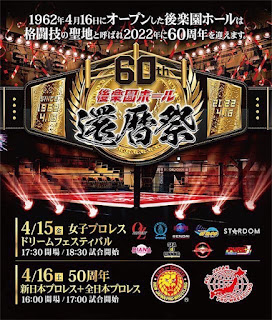 - STARDOM's KAIRI is donating part of her special 10th Anniversary in pro wrestling merchandise to the medical fund for Shinjiro Otani who was injured in a match over the weekend.

- KAIRI will be a guest commentator on the "Women's Wrestling Dream Festival" show at Korakuen Hall on 4/15/22 in celebration of the venue's 60th Anniversary. The show will stream live on SKY PerfectTV's fairly new SPOOX service for 4,400 yen. It is only available to view in Japan. Our great friend Tomi Yamada will be at the show to give us a report. Here is the lineup:

Asahi, Crea, and Kaho Matsushita vs. Madeleine, Nanami, and Kanon

Chihiro Hashimoto and Yuu vs. MIRAI and Maika Ozaki

- There will be a second annual Hana Kimura Memorial Show on 5/23/22 at Korakuen Hall with Syuri vs. Asuka (aka Veny) as the main event.

- Pro Wrestling WAVE held a press conference today to announce Kizuna Tanaka will enter the pro wrestling world after she graduates high school. She is the daughter of Minoru Tanaka and Yumi Fuaka. Her father now wrestles for GLEAT. Her mother wrestling for AJW in the mid and late 1990s then jumped to join Aja Kong's Arison in 1998. She retired in 2001.